Skip to content
Home/Articles/THE DIVES: On the Bathysphere Logbooks by Brad Fox
Next

THE DIVES: On the Bathysphere Logbooks by Brad Fox

In the summer of 1934, aboard a ship floating near the Atlantic island of Nonsuch, marine biologist Gloria Hollister sat on a crate with a telephone receiver in her ear, writing furiously in the notebook cradled in her lap. The phone line attached to a steel cable, which unrolled off the side of the vessel and plunged into the sea, sinking 3000 ft down. There, suspended by the cable, dangled a four-and-a-half-foot steel ball called the bathysphere. Crumpled up inside, gazing through three-inch quartz windows at the undersea world, sat Hollister’s colleague William Beebe. He called up to her excitedly, describing bizarre creatures, explosions of bioluminescence, strange effects of light and color. Hollister, scratching in her notebook amidst the rocking waves, listened, questioned, and tried to get down everything she heard. 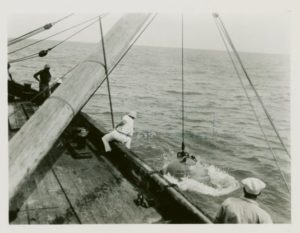 Bathysphere coming to the surface after a dive of half a mile off Bermuda, 1932. Manuscripts and Archives Division, The New York Public Library.

Hours later, after the ship’s crew reeled up the cable and winched the bathysphere onto the deck, Beebe emerged in a daze. He had seen new, fantastic species, but due to poor visibility he hadn’t been able to photograph what he saw. Knowing there would be no other evidence, artist Else Bostelmann stood by, and based on Hollister’s logbooks and Beebe’s de-briefings, she rendered images of creatures with glowing tentacles and luminescent fangs, outlandish species that a moment before she hadn’t known existed.

These collaborative writings and images offer the first eyewitness account of the deep ocean. Like the iconic photograph of earth taken from space, they are a turning point in how we imagine our planetary home. It made the bathysphere team famous. They received fan mail from Rudyard Kipling, Gypsy Rose Lee, and the Soviet Institute of Fisheries.

In Half Mile Down, his account of the expeditions published later that year, Beebe tried to describe the effect the dives had on him. The pressure and solitude had made him feel utterly vulnerable. But mostly he was stunned by color, and by the peculiar luminosity of the dark zone not reached by the sun. The word black, he wrote, could no longer be trusted. He would have to invent an entirely new vocabulary to describe the “single vibration” that had soaked his mind. 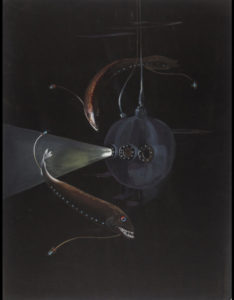 The bathysphere dives were the high point of the ten-year collaboration between William Beebe and Gloria Hollister, begun while they studied tropical birds and fish in South America. Soon after the dives of 1934, they both abandoned marine exploration and went their separate ways. But their approach to the natural world—emphasizing close attention to dense webs of interrelationships—lay the groundwork for what would become the study of ecology. Their influence is still felt today.

Hollister kept extensive diaries throughout the expeditions. She described the challenges and surprises of the work, her thoughts on science and religion, her occasional attempts to imagine the experience of the fish she was studying. These writings were archived upon her death, but they have never been edited or published. Some of Bostelmann’s illustrations were exhibited at New York’s Drawing Center in 2017, but more of her work remains in an archive at the Museum of Art in Bermuda, where it has rarely been seen. Even Beebe’s popular nonfiction books of the time are largely out of print today, and mostly forgotten..

I am interested in everything about the bathysphere expeditions: the backdrop of events in the US at the time (the Dust Bowl, the completion of the Chrysler Building), the advances in scientific knowledge, and the influence on ecological thinking. But my research focuses on the aesthetic and visionary aspects of the dives: that stunning moment of encounter. A steel ball dangling in the deep, humans confronted with the unknown, language and thought short-circuited. I am interested in struggles to capture that experience in words and images, even more, in that effort’s failure.

Brad Fox is a novelist, essayist, journalist, and translator living in New York. His American debut novel, To Remain Nameless, will be published by Rescue Press on May 1, 2020. His stories, articles, and translations have appeared in The New Yorker, Guernica, and The Whitney Biennial. His first critical article on Arabic visionary literature appeared in World Art in 2020. From 1996 to 2011 he worked as a journalist, researcher, and relief contractor in the Balkans, Mexico, the Middle East, and Turkey. He has received grants and awards from the Futures Initiative, the CUNY Center for the Humanities, the Berlin Senat, and the Roma World Congress. He teaches literature and creative writing at City College in Harlem. Find him at bradfox.org

Our new season program is here!  The second year of Art Science Connects kicks off with legendary artist, Joan Jonas, in conversation with Barbara London! Other public events include two hands-on workshops in our popular [...]

Check out our latest Spring 2021 newsletter! Despite its many challenges, the last year has strengthened our belief in the mission of Creative GC to foster vibrant discussions between art, science, technology, and the [...]

We are delighted to announce the Creative GC Fellows of 2021-22. With their diverse projects, the two Dissertation Fellows (Shima Houshyar and Joseph Henry) and the four Research Fellows (Jessica Fletcher, Shao Liu, Hadley Newton, [...]

While adjusting to our changed world, we realized that our season was uncannily suitable for our socially distanced reality, and we’re thrilled to share with you our virtual Fall 2020 Program! We begin Monday, October 5th, with [...]

As the COVID-19 situation continues to evolve in New York City, we will post news of upcoming events, dates, and details as they are determined. In the meantime, we will keep you updated on [...]